Marnie (Allison Williams) tries to convince a resistant Desi (Ebon Moss-Bachrach) to follow through with their planned gig at her mom's birthday party in New Jersey. After rebuffing Adam's (Adam Driver) request to watch his film, Hannah (Lena Dunham) gets advice on an important decision from her dad (Peter Scolari) and his new partner, Keith (Ethan Phillips). Elijah's (Andrew Rannells) thespian talents are rekindled when he helps a coworker run lines for an audition.

Hannah invites Marnie over to share her "big news". Marnie thinks her breakup with Ray will be the headline story until Hannah reveals she's pregnant. Marnie is shocked, but grows to like the idea.

During rehearsal for a show, Marnie and Desi get into a heated argument about an upcoming gig Marnie booked -- a birthday party for her mom's best friend, Sharva. Desi insists they should be focusing on more legitimate work, but Marnie argues they need the money.

Elijah stops by Hannah's room to let her know he doesn't think she'll be a terrible mother; she's concerned the baby could end their friendship. They decide to hug it out and move forward together.

Adam calls Hannah to beg her to watch his film, but she is adamant she won't. He appears outside of her building to continue his plea but stops when Hannah informs him she is pregnant. She uses the moment of disillusion to run away.

Marnie waits with Evie and Sharva for Desi to show up at the birthday gig. He finally arrives, very disheveled, and Evie calls him out for being high. Marnie attempts to cancel the performance, but Evie offers to take Desi's place and perform backup. Starting on a good note, things go awry when Evie goes from backup to lead, and ultimately begins "scatting". Marnie is humiliated, and Desi, realizing the band is over, leaves.

Hannah vents to her dad and Keith about her decision not to tell Paul-Louis about the baby. Tad is in full support of Hannah. When Keith gives Hannah a unique opposing perspective, the conversation between the two men gets heated, leaving Hannah uncomfortable and confused.

"I don't want to sound classist or whatever, but I'm not raising my child on an all-inclusive resort." - Hannah

At work, Elijah's colleague Padgett asks him to help go over lines for her upcoming audition. Elijah's commitment to the role completely wows Padgett. She asks whether he's considered getting back out there and auditioning again.

Jessa unexpectedly stops by Hannah's apartment to express her hurt that she heard about the pregnancy from Adam -- a clear sign of how distant they've become. She still believes they're "dear friends," but Hannah makes it clear their friendship has been over for a while.

Elijah tells Hannah about his conversation with Padgett, but her mind is in a completely different place. She tries calling Paul-Louis, but decides to leave it alone when she can't get through. Confronting the other thing she's been avoiding, Hannah begins watching Adam's film. 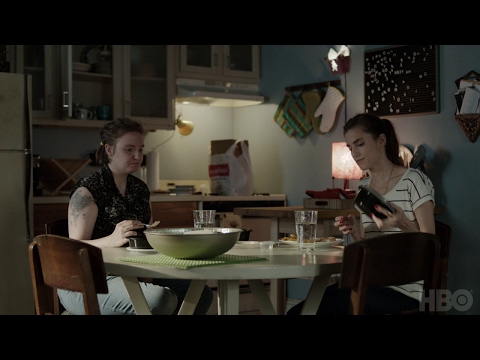