Hannah's mother Loreen calls with bad news: Grandma Flo has pneumonia and Hannah needs to come see her before it's too late. As Hannah packs her bags, Adam, in the middle of rehearsing for his Broadway debut, apologizes for not being able to join her.

Upon arrival at the hospital, Hannah runs into her Aunt Margo, who escorts her to Grandma Flo's room, warning Hannah to brace herself because Flo is in rough shape. Hannah, however, is surprised by Flo's rosy glow and cheerful demeanor. They're joined by Loreen and Hannah's Aunt Sissy, and tension runs high among the three sisters. Loreen chokes back tears while she looks at her mother in her hospital bed. Hannah's aunts implore her to take her mother to grab some lunch.

At lunch, Loreen admits that her relationship with Flo was often strained and that she is saddened that they may never get the opportunity to resolve their issues. In an effort to bring a smile to Flo's face before she passes away, Loreen asks Hannah for a favor - tell Flo that she and Adam are engaged. Hannah is outraged by the request. "I really thought you were more progressive than that." "No, I'm not," Loreen replies.

Hannah, her mother, and her aunts head over to Flo's house, where Hannah's humorless med student cousin Rebecca waits. Rebecca rebuffs Hannah's efforts to remain polite and appear interested in her life, adopting an attitude of superiority before inviting Hannah to grab a drink that evening.

Hannah calls Adam at rehearsal to tell him about her mother's request. The conversation quickly turns awkward when Adam simply replies that he's very committed to Hannah "at this time." Though Hannah insists that she is equally uninterested in any discussion of marriage, she tells Adam that the conversation is making her stressed and angry for reasons she doesn't quite understand.

Hannah meets up with Rebecca for drinks, though Rebecca shares that she doesn't drink on weeknights and only suggested they meet at a bar because she felt it "was the right place to go" with a person like Hannah. Rebecca then launches into a passive-aggressive tirade about what awful people writers are until Hannah can take no more. They trade jabs, questioning each other's respective senses of humor, before Rebecca reveals that their grandmother once referred to Hannah as "loose."

While driving back to the hospital, Rebecca answers a text from her mother. She ignores Hannah's pleas to focus on the road and crashes into a parked car.

Adam, having borrowed Desi's motorcycle, rushes to the emergency room to find Hannah with a few stitches on her forehead and Rebecca in a neck brace. "Don't only text me 'car crash'" an exasperated Adam shouts at a largely unharmed Hannah. Loreen and her sisters arrive and upon realizing that the girls are okay, share the news that Flo has taken a turn for the worse. Sissy announces that their mother requested not to be put on life support, and a loud argument erupts amongst the three sisters as years' worth of repressed grudges rise to the surface. Hannah takes Rebecca's hand in solidarity.

Hannah brings Adam to meet Flo, where he reluctantly fulfills Loreen's request and announces his and Hannah's impending nuptials. Flo offers Hannah her advice on marriage: "Someday you will look at him, hating him with every fiber of your being, wishing he would die the most violent death possible. It will pass."

Loreen thanks Adam and Hannah for the gesture, and Adam heads back to the city. "I guess if Grandma lives, we're gonna have to get married," Hannah jokes to her mother. They share a laugh, but Loreen tells Hannah she should "keep the job, not the guy," and "stay open to possibilities." Hannah balks and refuses to listen to her mother's warning that "it's not easy being married to an odd man."

After spending the night at the hospital, the family visits with Flo, who has beaten her pneumonia and is back to looking like her old, healthy self. On their way out of the hospital the sisters quietly reconcile and agree to make an effort to be closer to one another. Having arrived back in the city, Hannah walks outside Grand Central Station when she gets a call from Rebecca. Flo suddenly passed away after everyone had left, and Hannah needs to turn around immediately. 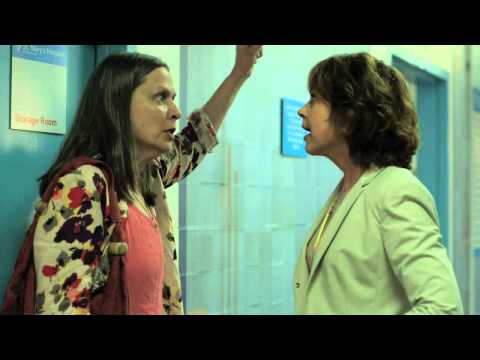