A flustered Hannah arrives late to a meeting with her editor, David Pressler-Goings, though she is relieved to learn that he has yet to arrive himself. Her relief subsides, however, when she overhears the receptionist reveal to a coworker that David has died.

Back at home, Hannah, still numb, regales Jessa with the details of her morning. Jessa explains that death is just "something that happens. It's like jury duty. Or floods." Adam arrives home, proudly toting a framed photograph of a young Tom Hanks. Hannah shares with him the news of David's death, though Adam's sympathy wanes when he discovers that the primary source of Hannah's distress is her confusion over the fate of her e-book, not grief over the loss of someone she "really knew." He admits being scared that Hannah might fail to appreciate the gravity of his own death, but she tries to reassure him by revealing that she thinks about him dying "all the time."

Jessa and Shoshanna discuss their experiences with death. Shoshanna tells the story of her high school friend Kelly, who died in a car accident. Jessa opens up about the death of her "favorite friend," Season. She "loved her a lot" and used to "tickle her all the time." Now Jessa doesn't even have a picture of her. Shoshanna encourages Jessa to contact Season's mom or visit her grave, or at least her Facebook "in memoriam" page. Following their talk, Jessa, in search of Season's burial site, calls an old friend and is shocked to learn that Season is still alive.

Concerned about making rent now that her e-book deal may be in limbo, Hannah picks up an extra shift at Ray's. She admits to Ray that she feels nothing over David's death. Disgusted by her "sociopathic detachment," he asks her, "You don't think it's slightly odd that I feel worse than you do right now, and the one time I met this dude, he hurled me across the room into a small table?"

Jessa tracks down Season and finds her living in a well-appointed brownstone, married with a baby. Jessa is furious with Season for faking her death as a means of avoiding her. Season explains that she had a terrible drug problem and desperately needed to get away from Jessa and her enabling tendencies. Jessa objects, but Season reminds her of the time she told her she needed counseling and Jessa took her to an ayahuasca ceremony. Jessa storms out, telling Season that "none of this is going to work out" for her.

Hannah runs into Laird in the hallway and shares the news of David's passing. Saddened, he swallows her in a big hug. Laird understands. His "whole life has been death." He's lost everyone, including his turtle, which he didn't even think was possible. Caroline, on her way out for her "afternoon constitutional," invites Hannah, Laird, and his turtle carcass (entombed in an empty Pom bottle) to join her.

Caroline leads the motley crew to a cemetery, where they frolic among the headstones. Hannah admits to Caroline that she fears Adam won't want to be with her once he realizes she can't match "his strength of emotion." While lying in the grass, Caroline shares the tragic story of her and Adam's cousin, Margaret, who died of muscular dystrophy at age 12. She explains that Adam spent every moment with her and even took her to his senior prom. She died a week later, "clutching the wilted corsage he had given her in one hand, while holding his in the other." Laird is moved to tears, while Hannah can only bring herself to muster up a "that sucks." Bewildered over Hannah's inability to foster an emotionally appropriate reaction to such a sad tale, Caroline admits she made the whole thing up.

While working a shift at Ray's, Marnie hears the faint yet familiar sounds of her humiliating YouTube video emanating from Ray's office. She heads back to find Ray and Hermie sharing a good chuckle over her misfortune. They try and fail to conceal their delight over her "music fail," and Marnie quits in a rage, insisting that "fancy people want to work with" her and she intends to "give them that pleasure."

Hannah returns home to find Adam sitting glumly on their stoop. In an attempt to forge an emotional connection with him, she tries to bring herself to cry over David's death. Unable to really let the tears fly, she switches gears and retells Caroline's fake cousin story, this time casting herself as the sympathetic, emotionally generous hero as a compassionate Adam listens on. 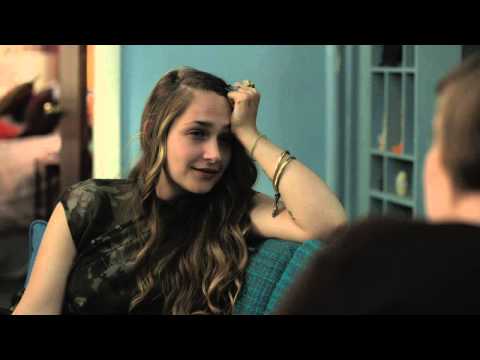